Since starting this season with four straight losses, the Los Angeles Chargers are 4-2 straight up and 5-1 against the spread. The Dallas Cowboys, on the other hand, started this season 5-3 but are on an 0-2 SU and ATS run. Two teams trending in different directions meet when Los Angeles dances with Dallas on Thanksgiving afternoon. 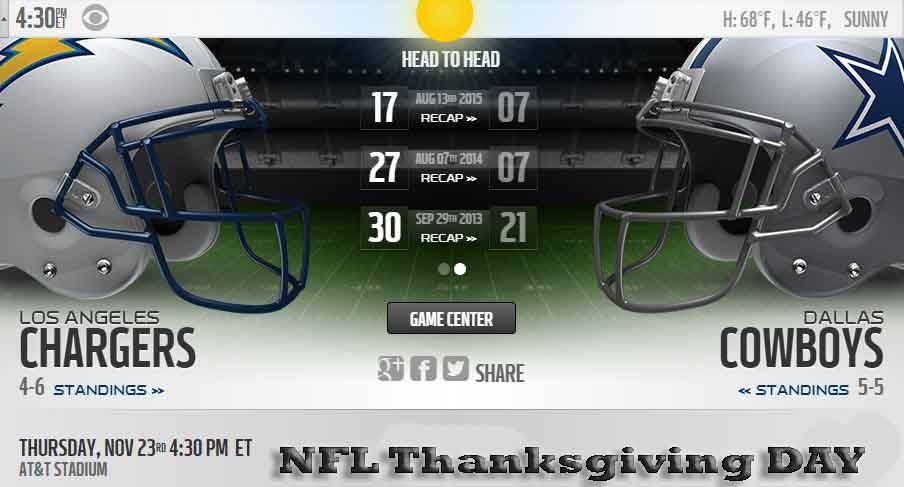 Why the Chargers can cover the spread

The Chargers just snapped a two-game losing skid with a 54-24 bouncing of Buffalo last week. Los Angeles took advantage of a Bills rookie quarterback to take an early 7-0 lead on a pick-six and later broke a 7-7 tie by scoring 33 unanswered points. The Chargers added another defensive score in the third quarter on their way to the easy cover as seven-point favorites.

On the afternoon, Los Angeles piled up 429 yards of offense, including 146 on the ground, held a 36-24 advantage in time of possession and won the turnover battle 6-0, resulting directly in 31 Chargers points.

Los Angeles may only be 4-6 on the season, but it’s also only one game behind 5-5 Baltimore in the battle for the second AFC wild-card spot.

Why the Cowboys can cover the spread

The Cowboys are a tough client to shill for at the moment coming off a pair of bad losses. Two weeks ago, in its first game without suspended running back Ezekiel Elliott, Dallas lost at Atlanta 27-7, and last week, the Cowboys fell at home to Philadelphia 37-9.

Dallas actually led the Eagles 9-7 into the third quarter but came up empty from there as Philly finished the game with a 30-0 run.

Two weeks ago, the Cowboys led the Falcons early 7-0 then faded from there.

The situation may seem dire, but at, 5-5 Dallas only trails 6-4 Atlanta by a game (and a tiebreaker) for the second NFC wild-card spot.