The New York Giants are 6-2 both straight up and against the spread over the last eight meetings with the Redskins, but Washington’s two wins have come in the last three meetings. In the 169th edition of a great East Coast rivalry, New York takes on Washington on Thanksgiving night. 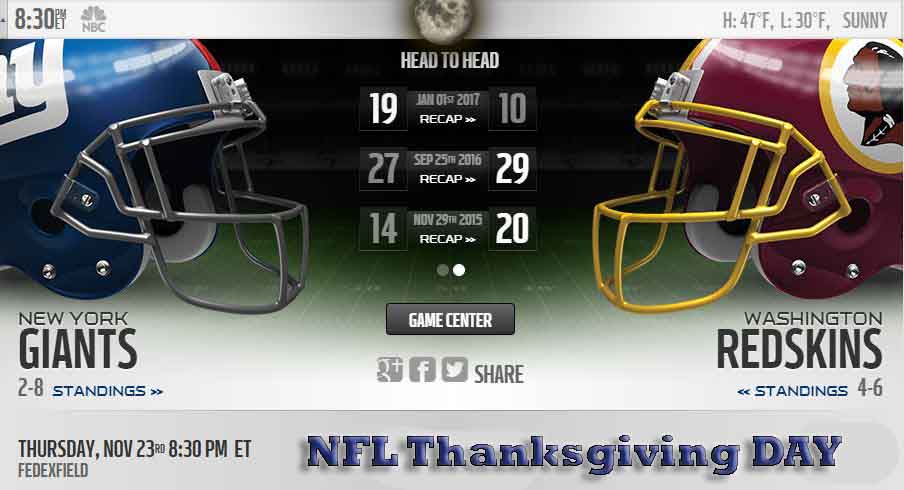 Why the Giants can cover the spread

The Giants picked up their second upset victory of the season last week, beating Kansas City in overtime 12-9.

New York, as a 10-point home dog, drew first blood with a second-quarter touchdown and led 9-6 late. The Giants then let the Chiefs tie the score with one second left in regulation, but they won the game on a short Aldrick Rosas field goal with two minutes left in OT.

On the afternoon, New York got outgained by Kansas City 363-317 but won the turnover battle 3-1, resulting in a plus-six point differential. The Giants are only 2-8 SU on the season, but they’re 4-3 ATS as underdogs.

Why the Redskins can cover the spread

The Redskins are looking to rebound from back-to-back tough losses, most recently a 34-31 overtime decision at New Orleans last week.

Washington led that game at the half 17-13 and 31-16 midway through the fourth quarter. But the Redskins fell victim to Drew Brees, who directed the Saints on two quick scoring drives that forced OT and later allowed two long runs that set up New Orleans’ game-winning field goal.

On the afternoon, Washington produced 456 yards of offense, 156 on the ground and 300 through the air. But the Redskins got stuffed on a late 3rd-and-1 run when a first down would have won the game, and they then got called for a defensive penalty that negated what would have been a game-clinching interception.

Two weeks ago, Washington lost by one score to a pretty good Vikings team in Minneapolis. And just before that, the Redskins upset the Seahawks in Seattle.

Washington is only 4-6 this season but with a little luck it could be 6-4.