The Pro Football Hall of Fame announced Thursday the Dallas Cowboys and Arizona Cardinals will kick off the 2017 NFL preseason with the annual Hall of Fame Game.

Ian Rapoport of NFL Network reported the contest will be played on a Thursday—August 3—instead of the game’s typical Sunday placement.

The official release noted it will take place inside reconstructed Tom Benson Hall of Fame Stadium, which is on track to be completed this summer. The Canton, Ohio, facility is located next to the Hall of Fame, where seven inductees are slated to be enshrined two days later. 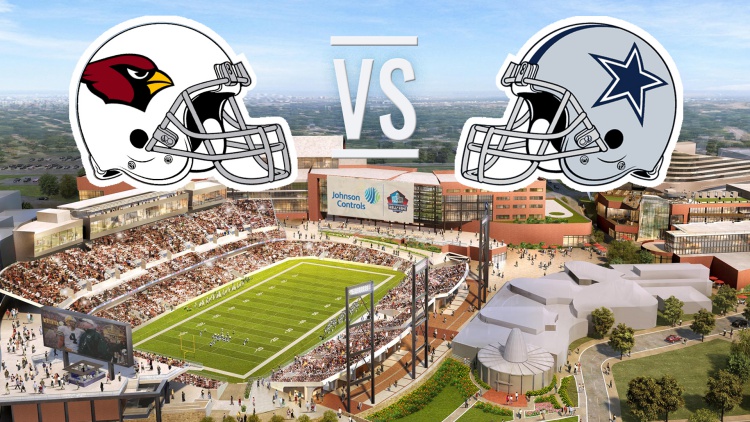 This will be the sixth appearance for the Cowboys (2-3 in their prior HOF Games) and the fifth for the Cardinals (1-2-1), according to the release.

The 2016 edition, which was expected to feature the Green Bay Packers and Indianapolis Colts, was canceled last August because of concerns about the playing surface.

Alison Matas of the Canton Repository reported in December the stadium was rebuilt with an eye toward hosting more events, including the potential for “an outdoor hockey game, a college bowl game, a religious festival or an international soccer game,” per Hall of Fame Village senior vice president Steve Strawbridge.

“There’s definitely a thirst here in the greater region for something like this,” Brock Richards, vice president of sales and marketing for the Hall of Fame, said.

A clash between the Cowboys and Cardinals should give the stadium a big audience for its national return to the spotlight. Expectations will be especially high for Dallas after a resurgent 2016 season where its 13-3 record was the best in the NFC.

Since it’s the first preseason contest of the year, however, don’t expect to see much of the Cowboys’ Dak Prescott and Ezekiel Elliott, the Cardinals’ David Johnson or any of the other marquee names.